Derby College provides an excellent learning experience to all its learners, enabling them to progress successfully to the next stage of their lives, be that further or higher education, the world of work or establishing a business start-up. 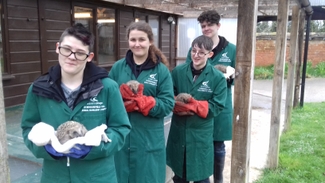 The four hedgehogs have spent the winter at Broomfield Hall being cared for by the students.  Having now increased in weight and health, they are ready to be released.

The young female hedgehogs, Pickles and Nibbles, came to Broomfield Hall from a wildlife hospital in October as they were too small to hibernate.

The males - Sonic and Tiny Tim - were found together in a member of staff’s garden in November and were again too under nourished to survive the winter.

They were taken in by the Animal Care department and learners have kept them at a constant indoor temperature to keep them awake and ensured they have been well fed over the winter months.

The foursome are currently in an outdoor pen for two weeks to acclimatise and will be released at dusk into the grounds at Broomfield Hall.

She said: “All four hedgehogs are now at a good weight so should survive well in the wild.

“They leave behind our four resident hedgehogs Little Jimmy who can’t curl up and Stevie - a blind female as well as two new arrivals Peggy and Pogo who both have three legs.

“Obviously they are all not able to be released back into the wild and will stay with us throughout their remaining lives.

“Caring for all these wonderful animals has been good experience for the learners and we also hold regular wildlife first aid courses for the public to raise awareness of how to care for these wonderful creatures.

“Nationally, the hedgehog population is in decline so it is important that people have awareness of how to look after these animals if they come into the garden, what to feed them on, signs of ill-health and what they should do if there is a problem.”

For more information about these and all the full and part time Animal Care courses at Broomfield Hall, please visit www.derby-college.ac.uk or telephone 0800 028 0289.

Image library associated with this story